Circle K donates resources to the Brenda Strafford Centre to assist in its goal of providing a safe and secure environment for women and children who have fled domestic violence. During their six month stay at the Centre, both women and children are provided with programs and services in a supportive yet independent environment.Funds have been generated through Circle K’s head office, conference activities, golf tournaments, and interested individuals associated with Circle K who wish to contribute additionally.

AN INTERVIEW WITH TESS FROM THE BRENDA STRAFFORD SOCIETY

How is Circle K involved with the Brenda Strafford Society?

Tess: It is our good fortune, and so fortunate for the program participants we serve, that Circle K has adopted us, so to speak, as an ongoing charity-fund recipient. Through this partnership, we have received funds through a number of means for a number of purposes. Funds have been generated through Circle K head office, conference activities, golf tournaments, and interested individuals associated with Circle Kwho wish to contribute additionally.

What's been going on lately?

Tess: Most recently we are embarking on becoming involved in Circle K AIR-serv program. Examples of where money has been designated includes general operations, furniture, moving allowance, family emergency funds (food, clothes, prescriptions and such), household items and the free Circle K store in our facility.

Tess: Circle K has supplied the Centre with funds to purchase new items for families fleeing domestic violence to shop in for free. Many of our residents come to us with little or nothing, particularly if they fled a volatile situation without notice. The store assists us in helping them replenish house wares and necessities for their new homes. Examples of store items include toiletries, linens, kitchen utensils, pots and pans, cleaning supplies, microwaves and vacuums. Inventory and designations to participants are monitored and counsellors are able to make referrals for specific items that they required. Staff, Circle K volunteers, and community volunteers do the shopping for items with Circle K funds.

HOW CAN PEOPLE GET INVOLVED?

Your support matters to The Brenda Strafford Centre! If you'd like more information or to make a donation, please visit the website!

REAL STORIES: THE DIFFERENCE THAT THE BRENDA STRAFFORD SOCIETY MAKES

I was diagnosed with Post Traumatic Disorder. Finally, I understand what has and is happening to me.

My ex-husband began hitting me before we were married. Instead of seeing it as abuse, I embraced the belief that it had happened only because of who I was and something I must have done.

I embraced this philosophy during the 17 years of marriage. It was always “my fault” and if I could change, the emotional and physical abuse would end. Of course, it did not. In the meantime, I became increasingly fearful, anxious and depressed. I became an “expert” at lying about why I could not go to work, why I could not make social engagements and at applying make-up to cover the bruises.

Forced isolation during my pregnancy, verbal and emotional abuse, and finally, financial dependency.

I felt all I had was my child and him.

The last time I was hospitalized, he left me with a back injury, damage to my left eye and hearing loss in my left ear.

As I was living at the hospital, the nurse handed me a brochure for The Brenda Strafford Centre and advised me to phone. She said, “The next time he will kill you, and your child will have no one to defend her.” That was enough for me, my ex-husband had never touched my child, but if I was not there, I knew he would.

My child and I left him, and have not looked back. The Brenda Strafford Centre helped heal my family.

For me and my child, the cycle of abuse has ended. Just because that was my life then, it does not mean it has to be my future. That is the biggest gift The Centre has given me. I am my daughter’s role model. I am a survivor, not a victim. Being a battered woman did not define me. I am a success – that is what defines me.

Shelly referred herself to the Centre from another province. Leaving her partner of eight years because of physical, emotional and financial abuse was not easy. She had to return to her partner a number of times because of financial constraints. Getting out of the cycle of abuse was difficult as she had been a witness to domestic violence between her parents and had also been abused by her father. Once accepted to the Centre, Shelly was determined to change the course of her life. She was diligent in attending counselling sessions and women’s support groups. She wanted to work on setting boundaries for herself with other people and also discuss and gain an understanding of the cycle of abuse that had entrapped not only herself, but also her children.

Her immediate goal was to heal and then work towards being independent, both financially and emotionally. By the time she was ready to move out to her new place she had a secure job and was, “after many years of fear, really looking forward to living again.” Shelly stated that “At the Centre I had time to turn my life around. The support I received here, both emotionally and practically, was amazing. To be finally free of the negativity is really miraculous for me.

Shelly’s promise to herself going forward: “not losing sight of what I need to do to continue being a survivor and to be a positive role model for my children .” 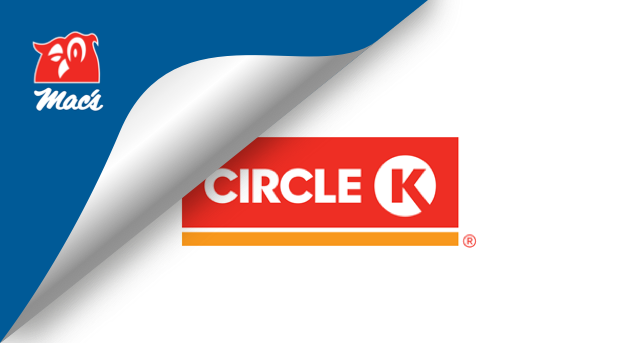 Mac’s is changing to Circle K.

Our look may be changing, but you’ll still see the same great people and products you know and love.

Please note, all invoices must still be issued to Mac’s Convenience Stores Inc.